Opened on April 20, 1904 by Paolo DeRobertis, the pasticceria was originally called Caffe Pugliese in honor of Paolo’s Italian birthplace in Puglia, Italy.  In 1928, Paolo trained his son John DeRobertis Sr. and passed the business on to him.  Today, it is run by John DeRobertis Jr. who grew up on East 11th Street but now commutes in each day from Nutley, NJ to make sure his family’s legacy continues.  He is proud of the fact that everything is baked on the premises.  The original ornately-tiled floors and pressed-tin ceiling still remain today.

So now back to that mob connection.  It’s a pretty well known fact that gangsters like their cannolis, so why wouldn’t they hang out in a pastry shop owned by fellow Italian immigrants?  DeRobertis was considered the “safe” mafia hangout of the East Village.  Local boy Lucky Luciano often hung out there in the 20’s, holding meetings in the back room with fellow mobster and Lower East Sider Meyer Lansky.  In fact, actor Vincent Piazza, who plays Luciano on Boardwalk Empire, spent time in DeRobertis as research for his role.

The mafia connection to the bakery only grew as the years went on and the mob’s stronghold intensified.  In 1935, mobster Mike Sabatelli, aka “Mike the Boss,” was arrested at DeRobertis with several others for running an “Italian Lottery” out of the pastry shop.  During the 70’s it was a favorite hangout for Carmine “Lilo” Galante, then boss of the Bonanno crime family.  In fact, Galante is believed to have murdered Carlo Tresca outside of JOHN'S ITALIAN RESTAURANT .  In 1991, eight members of the Gambino crime family were indicted on murder and other charges.  One of these men was John “Handsome Jack” Giordano, who had assumed some of John Gotti’s power while he, at the time, was in prison awaiting trial.  The arrests stemmed from the crew’s “office” in DeRobertis where they ran “businesses” of gambling, lone sharking, extortion, drug and weapon dealing, and the sale of forged credit cards.   Wiretaps were placed in DeRobertis in addition to a presence of undercover cops and informants.  Giordano’s uncle, Joseph “Joe Piney” Armone, had first started running operations out of the pastry shop when he became John Gotti’s second underboss (his first, Frank DeCicco was killed in 1986).  Armone went to prison in 1988 for racketeering, at which time matters were handed over to Giordano, who would receive a one-year sentence after the DeRobertis raid (he was shot and killed in 1995 on the Upper East Side).  According to a New York Times Articles written about the 1991 arrests, shortly after the commotion everyone went back to merrily eating their Pignoli cookies and sipping espresso.  We can’t say we blame them by the looks of those delicious confections. 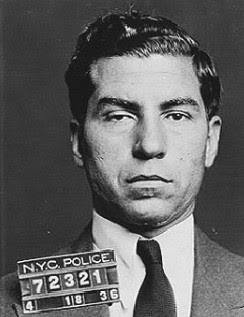 LUCIANO immigrated with his family to the Lower East Side of New York in 1906 at the age of 9 from Lercara Friddi Sicily. His childhood home was at 265 East 10th Street, just a couple blaocks from Lanza's and DeRoberti's Italian Pastry Shop on 1st Avenue. This neighborhood at the time had a large population of Sicilian immigrants, as well as immigrants from Napoli, Calabria, and Puglia as with the DeRoberti's family.

DeRoberti's Pastries opened in 1904 and was considered a relatively safe hangout for members of the mafiaover the years. Luciano often hung out there and had meetings with fellow mobster Meyer Lansky in the back room of the pastry shop. Members of the Genovese and Gambino crews also met at DeRoberti's as well.

Best Selling Italian Cookbook Author Daniel Bellino Zwicke has quite a strong connection to DeRobertis, Lanza's, and especcially John's of East 12th Street where Daniel worked as a waiter / bartender for 7 years in the 1980s .. Daniel lived just a few blocks away from the infamous Mafia Hot Spots / Italian Eateries ... He lived on Avenue A at the corner of Saint Marks Place for 11 years from 1982 to 1994.

Daniel was a young man in his early 20s, working hard in the restaurant business. His mani goals weere two fold, to beccome a Chef and to own his own restaurant one day. Prior to moving to the East Village of New York's LES, Daniel attended New York Technical College in the schools Hotel Restaurant Management Program, with his main interest in the Culinary Classes which  were highly renowned. At the time, Daniel was actually more interested in learning and perfecting his talents in French Cuisne of the Culinary Arts and not of the Italian genre, which he would later move into.

Daniel worked in some of New York's op French Restaurants of the day, including; The Palace Restaurant with Chef Michel Fitoussi, Lutece with Chef Andre Soltner, and The Odeon and Cafe Louxenbourg with the late great Chef Patrick Clarke, who like Daniel went to New York Technical College as well.

At the time, working in the kitchens of these restaurants, a prep or line cook could only make about $300 a week, which was not enough for Daniel. Luckily he seridipitdously made the acquaintance of Myron Weiner who was one of the two partners of the old red sauce joint John's of 12th Street. They met while having Italian Ices at a Street Fair on University Place in 1981. Myron told Daniel he owned John's, and Daniel asked if they were looking for any waiters as he was looking for some part-time employment. Daniel started working at John's and the rest is hsitory. He would cook 4 lunch shifts and one dinner shift a week, and work at John's 3 nights a week, mostly waiting tables, and once a week tending bar. In those 3 nights, Daniel made more than 5 days work in the kitchen, and it afforded him the ability to pay all his bills; Rent, Food, Con Ed, Phone Bill, etc.. And because of John's, Daniel had plenty of money to buy the nice clothes he liked, go out to eat in restaurants, and take a nice vaction to Paris or Italy every year. This suited Daniel fine. He waited tables and had a good time at John's, meeting celebrities along with the funcky East Village characters of the day.

Daniel worked hard and played hard, chased the ladies and sewed some wild oats. Part of his socializing and enjoying life including, going out to eat at various restaurants, as well as a but of clubbin (Night Clubs), cafe and bar hopping. Two of Daniel's favorite places for Cappucino and Italia Pastires were a couple venerable old Italian Pastry Shops nerby in Veniero's (Since 1892) and DeRobertis on Second Avenue, just about 100 feet from Veniero's. Next to DeRoberti's was Lanza's an old school Italian Restaurant that was in operation since 1904 . There was a stretch of time in the early 90s when Daniel, his girlfriend Dante, and their friends John and Jorge would have lunch many a Saturday at Lanza's before heading to work at Les Halles where they all worked at the time. They also loved going for Cappuccino and Cannoli or Sfogliatelle at DeRobertis all the time and sit in the back room with the old Subway Tiles and 1920 Silver Dollar imbeded into the tile floor. There was nothing better, and Daniel says it saddens him terribly that both Lanza's and DeRobertis where he had countless good times, are now closed down. Daniel says, "It's a Sin," and it is. He also misses terribly his old friend Vinny's place, La Focacceria, also on 1st Avenue as well as Brunetta on 1st Avenue, one block up from Lanza's and DeRoberti's on the block between East 11th and East 12th Street. The first location of La Focacceria was on this block as well, but they moved to First Avenue between East 7th Street and St Marks Place sometime in the early 80s .

La Focacceria was were Daniel first learned of one of his ancestral Sicilian dishes called Vasteddi (Pane Muesa), along with real Sicilian Pizza known as Sfingione. Both dishes along with Aracini (Rice Balls) are dishes of the Sicilian Capital City of Palermo where, along with Lercara Friddi are where Daniel's maternal grandparents Giuseppina Salamei and Fillipo Bellino were born and immigrated from, to come to New York in 1904 ..

Not long after Daniel moved to the East Village neighborhood of athe East Village that was not now, but once-upo-a-time a Sicilian-American stronghold neighborhood. By this time in the 1980s the East Village had a strong Ukranian and Eastern European contingency, but remnants of the old Sicilian Neighborhood remained in the form of John's of East 12th Street, Lanza's, La Focacceria and Brunetta's, the DeRoberti's were from Puglia in Southern Italy.

So Daniel had a good time, and learned a thing or two along the way. After going to Italy for the first time in 1985, and falling head over heals in love with Italy and Italian Culture (his own) Daniel deccided he wanted not to continue his pursuit of the French Culinary Arts, but authentic Italian Cuisine instead. And thus he set out to start working in an Italian Kitchen to learn from and Italian Chef. Daniel got a job as a line cook at Caio Bella Restaurant and learned from Pasquale, a very talented Chef from Brindisi, Italy. Daniel worked at Caio Bella and learned how to make the "World's Best Blognese," Pasta Fagioli, Risotto, Frittata, and all the great regional dishes of Italy. He also embellished his learning, by eating at Italian Restauarnat in New York, but more so in Italy on his yearly travels to his mother country. Daniel bought every good Italian Cookbook he could get his hands on, he read the books, cooked many dishes and would eventually start writing his own. This is how you learn, read, watch, gain experience and grow. The education of Daniel Bellino Zwicke.