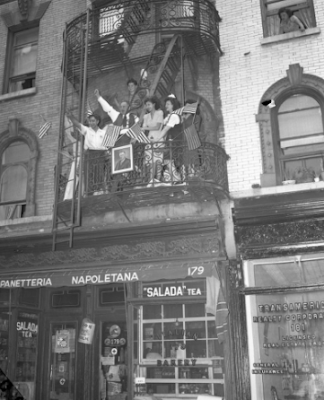 Raise the rents, take the cannoli: Little Italy is disappearing.
The downtown neighborhood — long a haven for immigrant families from the old country — was once threatened by an ever-expanding Chinatown. But now the fatal blow is being delivered by the gentrifiers.
Young professionals, expensive lofts and boutique shops are all moving in. Brooks Brothers, the epitome of conservative style, is considering a Little Italy outlet.
"The blocks used to be full of Italian families," recalled local resident Sonny Mongielle, 85. "Every block represented a different region of Italy.

"But it's just a matter of time before Little Italy is no more," he said.
The most recent census delivered stunning news for the tract at the heart of Little Italy: The neighborhood is home to not a single Italian-born resident, down from 44 in the 2000 Census.
But the Chinese-born population of Little Italy is down, too — 31% — and the Asian immigrant population is also on the decline, falling 18.6% in the last decade. 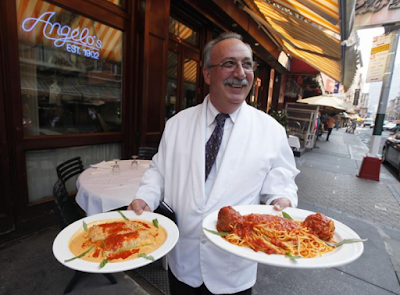 A Waiter with Manicotti & Spaghetti & Meatballs

ALL YOUR FAVORITE ITALIAN RECIPES

What's up are incomes and homogeneity.
The median pay of residents of Little Italy has risen 27% — and the population of residents earning more than $100,000 is soaring, up 156% over the last decade. The white population is up 33%.
Celebs such as director Sofia Coppola were among the well-to-do recently checking out condos at the Brewster Carriage House at Mott and Broome Sts. The properties sold for millions.

"The lofts are selling for higher and higher," said Tim Bascom, owner of Bascom Real Estate. "It's becoming a cool place to be. Young people love it, and can afford it."
Faith Hope Consolo, retail chairman for Douglas Elliman, said Little Italy remains caught in a residential and retail shift.
"This is SoHo extended," she said. "The little boutiques are in Nolita, but they are coming fast to Little Italy."

There are still 44 distinct Italian restaurants, bakeries and cafes in Little Italy.
But tourist mainstays such as Ristorante S.P.Q.R. and Cafe La Bella Ferrara have closed. And even the new incarnation of Umberto's Clam House, near the original Umberto's where gangster "Crazy Joey" Gallo was killed in 1972, is facing a rent hike that will likely end its run.
At La Bella Ferrara, the monthly rent went from $7,000 to $17,000 in just two years — and the sad owners closed after 42 years in business.

"We serve dessert and coffee, we can't afford that," said co-owner Frank Angileri, 69. "They pushed us out. . . . Italian businesses can't survive here, with the rising rents and the economy.
"It's a shame, it's such a shame. They kicked us out like dogs."
At S.P.Q.R. on Mulberry St., the landlord, who upped the rent to $55,000, is already eying the space for condos.

Manager Mike Ahmed, a 32-year S.P.Q.R. veteran, recalled the glory days: Guests from around the world, people getting engaged or married at the 500-seat restaurant, important business meetings held over the linguine di mare.
"It's become too hard to make a living out of this place," he said with resignation. The soaring rents are "the start of a cancer we're not going to be able to control," he adds.
At Puglia Ristorante, the loss of customers forced the shutdown of two adjoining dining rooms in recent years.
The restaurant was temporarilty open just four days a week, but is now back on a seven-day-a-week schedule. Frank Medina, a real estate manager whose clientele includes the vintage eatery, says he's reluctant to bring in another restaurant to the location.
"The only thing that's keeping this area alive," he said, "is the San Gennaro Festival and the Chinese counterfeit (products). It's very bleak.
"The joke here is Little Italy is very little — and getting littler," he added. "In 10 years, it's hard to say what'll happen to Little Italy."
The disappearing businesses are changing the area's familiar Italian look.
Julen Larrinaga, who works at the Grey Dog Cafe between Grand and Hester Sts., said out-of-towners are confused when they arrive at his place, where the gentrified offerings include scrambled eggs or granola for $9, a cheeseburger is $11 and "Michigan sandwiches" are $9.75.
"Tourists come into the shop and ask where Little Italy is," said Larrinaga, 24. "I tell them they're technically in it already." 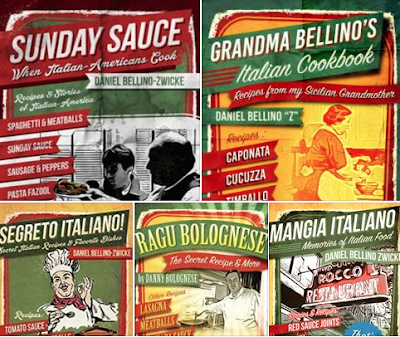