CAFFE REGGIO
GREENWICH VILLAGE
Caffe Reggio is a New York City coffeehouse first opened in 1927 at 119 Macdougal Street in the heart of Manhattan's Greenwich Village. Italian cappuccino was introduced in America by the founder of Caffe Reggio, Domenico Parisi, in the early 1920s.[1] Inside the cafe, against the back wall, there is still the original espresso machine, made in 1902, that Domenico Parisi bought with his savings when he opened the cafe in 1927. The Caffe Reggio has been featured in many movies, including The Godfather Part II, Next Stop, Greenwich Village, The Kremlin Letter, Shaft, Serpico, The Next Man, In Good Company, Inside Llewyn Davis and others. Many celebrities have been spotted or photographed in this location. In 1959, presidential hopeful John F. Kennedy made a speech outside the coffee shop. In 2010, the cafe was honored with a Village Award[2] by the Greenwich Village Society for Historic Preservation for its status as a beloved and essential part of the neighborhood. Caffe Reggio has a bench from a palazzo of the Florentine Medici family of Renaissance fame. The bench is not roped-off and guests can sit on it and admire a painting
from an artist of the school of Caravaggio.

All photos by Daniel Bellino Zwicke

Not in Caffe Reggio

SUNDAY SAUCE is AVAILABLE in Paperback on AMAZON.com .. Click 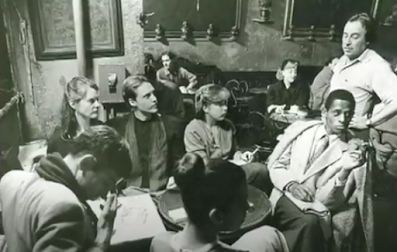 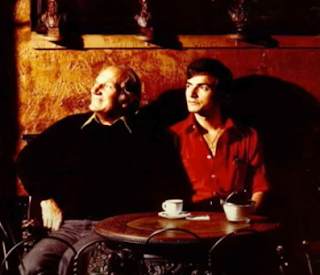 The Cavalacci's
Fabrizio (current owner) with his Father 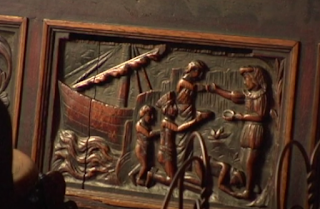 A RENAISSANCE BENCH
From a MEDICI PALAZZO 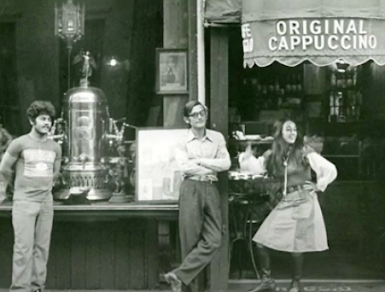 CAFFE REGGIO during The BEAT ERA of GREENWICH VILLAGE 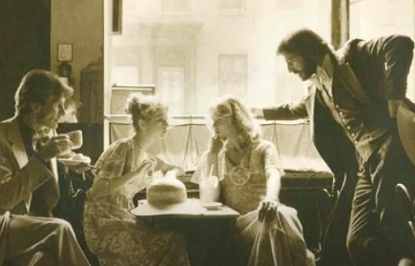 Email ThisBlogThis!Share to TwitterShare to FacebookShare to Pinterest
Labels: CAFFE REGGIO GREENWICH VILLAGE ITALIAN CAPPUCCINO ESPRESSO with paintings from the School of CARAVAGGIO and MEDICI PALAZZO