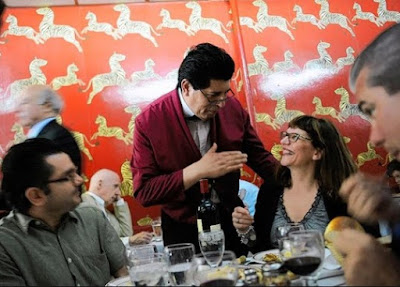 A Waiter at GINO'S

"You've got to get Pasta Segrete" 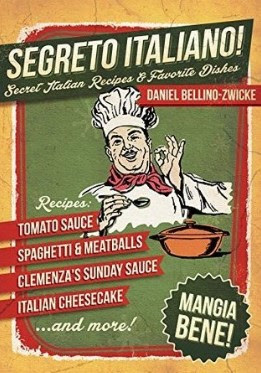 There is something very authentic about this book and the author Daniel Bellino-Zwicke. Entertainingly straight-forward and real, this cookbook has an awesome Italian American vibe throughout from cover to cover. Use this cookbook to create a dining experience that will make spectacular memories of comfort and deliciousness!Italian and Italian-American cuisine is one of my favorites and it is just a blast trying out these rocking recipes in my own kitchen. These really are some secrets from the masters because they are uniquely wonderful – just created the Eggplant Caponata to the delight of my friends and family!If you love Italian American food and like to cook and impress your Soprano’s fans, then pick up this book now! Outside The Old GINO RESTAURANT

One block north of Bloomingdale's famous department store. Gino Restaurant, which all the regulars called Gino's was one of the greatest most beloved Italian Restaurants in the history of New York City. And it's just that, part of New York City History. Sadly, we lost Gino's nine years ago, as the restaurant sold its last plate of its famous "Pasta Segreto" in the Winter of 2010. Some of Gino's many regulars which included the likes of Frank Sinatra were brought to tears the day Gino shut its doors. The restaurant was truly one of those much beloved places that you don't see every day, and it's a dam shame we lost her. All of us who ever went there have many cherished memories spent with friends and family at Gino's. I'm sure if Frank Sinatra was still alive, he'd tell you a few stories himself. Maybe his daughters Tina and Nancy Sinatra who of course are still alive might have some memories of their father, the great Francis Albert Sinatra holding court at Gino's. Yes we all know that Patsy's across town from Gino's was Frank's favorite Italian Restaurant o f all-time, but Mr. Sinatra loved Gino's as well, and dined there many times.

Hey Tony Bennett who is till alive, is a fan of Gino's. Maybe he can tell us some stories. Well, best selling Italian Cookbook author Daniel Bellino Zwicke is alive and doing well, and always writing about Italian Food, restaurants, pizza, pasta, celebrities, and Italy, and he has told us a few stories of great times with friends and family; his Cousin Joe, Brother Michael, and sister Barbara, and his fond memories of eating Baked Clams, Rigatoni Segreto and Veal Milanese, which Daniel says was his typical dinner when he dined at Gino's with Cousin Joe Macari (Macari Vineyards).

Yes Gino's was one great restaurant, that saw the likes of Mike Wallace, Gregory Peck, Gay Talese, and Italian Bombshells Sophia Loren and  Gina Lollibrigida. The great things about Gino's was that it was a well-rum machine, and its total mix of wonderful expertly prepared Italian Food, lively ambiance, excellent service, and cool vibrant crowd made for the most perfect mix that was Gino Restaurant. And if that wasn't enough, the prices of the food and wine was most reasonable. This was just another added plus of this legendary New York restaurant. And the restaurant that Gino's was, as shall tell you that the type of restaurant it was what we now call Old School Italian Red Sauce Joints. Yes, an old school Italian Red Sauce Joint, and the best old school Italian restaurant that any could ever possibly be. The same as places like John's of 12th Street, Monte's Trattoria in Greenwich Village, Rao's, up in East Harlem, New York.  Like any Red Sauce worth its Salt, Gino's had great Red Sauce of course, with items like, Baked Clams, Spaghetti Meatballs, Manicotti, Lasagna, Veal and Chicken Parm, and Frank Sinatra's favorites; Clams Posillipo and Veal Milanese.

We morn the passing of Gino Restaurant, as we morn the closing of two other great Old School Italian eateries of DeRoberti's Italian Pastries and Lanza's Restaurant, both of which were on 1st Avenue two doors from one-another on the block of 1st Avenue between East 10th and 11th Streets in New York's East Village, which years ago was simply known as the Lower East Side. Luckily the other famous old Italian Eatery, "John's of 12th Street" is alive-and-kicking after more than 110 years in business in the old Sicilian neighborhood where Mob Boss Charle's Lucky" Luciano grew up (born in Lercara Friddi) after his family moved to East 10th Street (# 265) from Sicily. 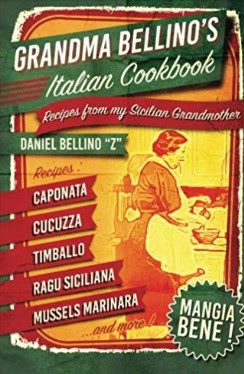 GINO RESTAURANT was named after owner Gino Circiello. Gino's partner was Guy Aventuriero. They were both born in Capri, Italy.

The tow partners Gino and Guy financed their restaurant (Gino's) with their own money, along with help from Franco Scalamandre who owned the Scalamandre (Wallpaper and Fabrics).

The famous Zebra wallpaper was designed by Flora Scalamandre. 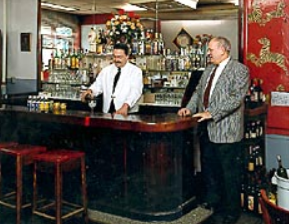 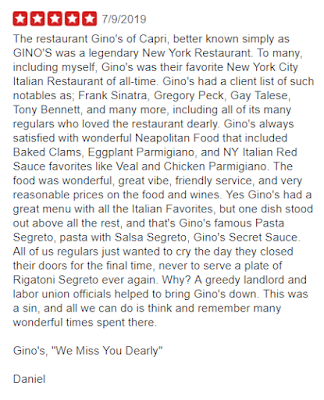 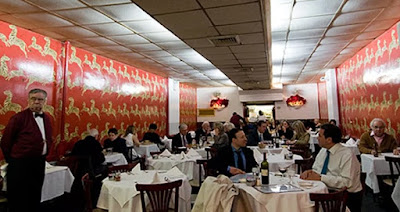 Dinner at GINO'S of CAPRI

Posted by xpicassox at 9:22 PM