Bumped into Federico today. Frederico Castelluccio that is. I know Federico for a few years. We are not fast friends or anything like that, aquaintances you could say, I know him from around town and when he first started coming to a restaurant I was Wine-Director of Barbetta. Federico first came to Barbetta with Tony Cipolla and the great Italian actor Giancarlo Giannini of Swept Away and other fame.

Anyway I bumped into Federico who was having lunch with a friend at Da Silvano Restaurant in my neighborhood. We chatted a few minutes and I gave him a copy of my book "La TAVOLA" Hope he likes it. Many might not know, but Federico is a World Renowned Painter. He paints in oils in the classic style, and he is a great painter. Federico was born in Naples, Italy and grew up in Paterson, New Jersey were his parents immigrant to when Federico was just 4 years old in 1964. Federico was a talented young artist and was awarded a full scholarship to The School of Visual Arts. Federico started acting in 1986 and is best know for his role as Furio in HBO's The SOPRANOS. Federico has many other acting credits. He's an all around talented guy and a Prince of a Person. We look forward to all of Federico's artist endeavors in painting, acting, and other. Bravo Federico!

Federico Castelluccio In HIS STUDIO

"La TAVOLA" Is Available on Amazon.com along with Other Titles by Daniel Bellino Zwicke, Including THE FEST of THE 7 FISH and GOT ANY KAHLUA?  The COLLECTED RECIPES of The DUDE .... ABIDE ! Watch for Daniel's "SUNDAY SAUCE" Due For NOVEMBER 2013 PUBLICATION ....

Get SUNDAY SAUCE on Amazon.com 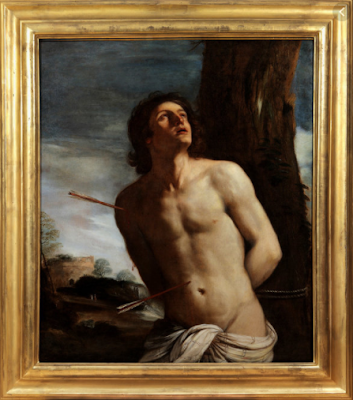 Federico Castelluccio discovered a 17th century painting by Italian Baroque painter Guercino at a Frankfurt gallery and subsequently purchased it at auction after it had been incorrectly identified as an 18th-century painting. The painting was purchased for €49,000 and was estimated at $10 Million Dollars. The total cost of the painting including restoration and shipping plus extra costs came to $140,000

Email ThisBlogThis!Share to TwitterShare to FacebookShare to Pinterest
Labels: FEDERICO CASTELLUCCIO Furio in The SOPRANOS is a WORLD CLASS PAINTER from NEW JERSEY born in NAPLES ITALY, Guercino Saint Sebastian